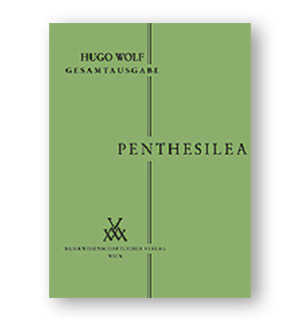 [ Departure of the Amazons for Troy
Penthesilea's dream of the rose-feast
Fights, passions, madness, destruction ]

Penthesilea is Hugo Wolf's only large-scale orchestral work. The 'novelty play-through' it was given by the Vienna Philharmonic on 15 October 1886 under the baton of Hans Richter proved a bitter disappointment to the composer. The musicians laughed and Richter summed up as follows: 'Gentlemen, I would not have insisted on your playing the piece through to the end, but I wanted to take a closer look at the man who dared to write about our revered master Brahms in this way.' While the instrumentation may have its shortcomings in respect of balance, it is nevertheless way ahead of its time and the overall sound canvas is not unlike that of Richard Strauss.

Only three manuscript sheets have survived from the first movement of the Symphony in B flat begun by Wolf on 26 October 1876, but the Scherzo, intended as a second movement, is fully extant. All we have of a slow third movement is a number of sketches. Wolf intended to make an arrangement of his 'Rondo capriccioso for piano' for the fourth movement, but only reached bar 357; the remaining fifth of the movement has been orchestrated by Helmut Schultz, who was careful to apply Wolf's own instrumentational technique.

In 1892, Wolf arranged his 'Serenade for string quartet' (W XV/3) for small orchestra, and subsequently had the idea of adding further movements to the arrangement. Extant are drafts for a slow movement and a Presto, which Wolf replaced with a Tarantella when he was confined in the Svetlinsche Anstalt asylum(W XVII/3).

Edited, with a critical report, by Leopold Spitzer (1998)


From July 1876 until December 1897, the month he composed the Tarantella, Wolf constantly wrote for the orchestra, partly programme music, and partly as accompaniment for vocal works. Progressive though he was as a composer, as an orchestrator Wolf was highly conservative, hardly going beyond Berlioz. That this was not due to lack of ability or creativity is clear from the instrumentation of the Elfenlied and the slow movement of Penthesilea; Wolf's conservatism sprang rather from his conviction that orchestral sound should not become an end in itself, but should rather be used exclusively in the service of the text or the 'programme'. (Leopold Spitzer)