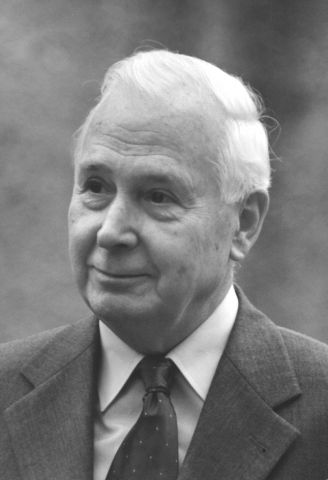 
The Musikwissenschaftlicher Verlag is deeply grieved by the passing of its honorary president, Prof. Dr. Herbert Vogg, who passed away on 29 December 2021.


Born in Vienna, Vogg studied musicology and German before starting his professional life in the music publishing house of Doblinger, where he first completed a music dealer apprenticeship, became editor and, soon after, publishing director, remaining in this position until 1988.


In 1979 he additionally became the managing director of the Musikwissenschaftlicher Verlag. In his total of 23 years in this function he succeeded in completing the Anton Bruckner Complete Edition published under the general editorship of Leopold Nowak. He had promised the gravely ill Leopold Nowak to complete the edition and was able to do so with the aid of internationally renowned specialists. In 2001 the last score volume conceived by Nowak was completed, enabling Herbert Vogg to hand his duties over to his long-standing collaborator Tilly Eder in 2002.

The MWV was founded in 1933 by the International Bruckner-Gesellschaft (International Bruckner Society, IBG for short) for the specific purpose of publishing a critical complete edition of the works of Anton Bruckner, a project undertaken by the IBG in collaboration with the Austrian National Library, Vienna.
The foundation of the MWV and the first publications of the Bruckner Complete Edition had been preceded by years of preparatory work, particularly on the part of Robert Haas, Director of the Music Collection of the Austrian National Library. Haas became General Editor, with Alfred Orel as his first collaborator; in 1937 Alfred Nowak became co-General Editor. In spite of the difficult circumstances of the time, numerous volumes were published in quick succession. After the Anschluss of 1938 had incorporated Austria into Hitler-Germany, the MWV and IBG were dissolved in Vienna and transferred to Leipzig, where the stocks of the publishing house were destroyed in an air-raid in 1945, shortly before the end of the war. After the end of the war, the IBG, MWV, and Bruckner Complete Edition returned to Austria. Between 1951 and 1989, when poor health forced him to step down as General Editor, Leopold Nowak personally edited almost the whole of Bruckner's work. In his capacity as Managing Director, Herbert Vogg was – with the cooperation and hard work of a number of prominent Bruckner researchers – able to oversee the publication of most of the outstanding volumes.
Since 2016 in the NEW ANTON BRUCKNER COMPLETE EDITION all of the composer’s works appear in newly edited scores based on the most up-to-date research.

The International Hugo Wolf Society Vienna was founded in 1956 with the principal intention of publishing a critical complete edition of the works of Hugo Wolf. Hans Jancik was appointed General Editor; having prepared the 1960 edition of the chamber music, he continued by editing volume after volume of further works. In 1991 he passed on the General Editorship to Leopold Spitzer, whose most important achievement has been the publication of the full and piano scores of the Der Corregidor together with libretto and critical report, complemented by a fundamentally important comprehensive study of the composer Hugo Wolf based on facts and data provided by Der Corregidor. Spitzer also ensured the incorporation of critical reports into reprints of earlier volumes of the complete edition, and of English- and Italian-language prose translations of the texts in the reprints of the volumes of Lieder. He brought the Wolf Complete Edition to completion with the publication of the fragments for orchestra.

For decades, the work of the MWV focused on the Bruckner and Wolf complete editions. This fact is reflected in the book publications, which are mostly devoted to subjects related to these two composers.
Sincy many years, the publications of the Anton Bruckner Institut Linz (ABIL) have since occupied an important place in the MWV catalogue:
Anton Bruckner - Dokumente und Studien (MV 101 ff.)
Bruckner-Jahrbücher (MV 201 - 209)
Bruckner-Symposionberichte ('Symposium reports', MV 301 ff.)
Bruckner-Vorträge und Tagungsberichte ('Lectures and conference reports', MV 401 ff.)
Since 2009 MWV publishes also the series „Wiener Bruckner-Studien“ („Vienna Bruckner Studies“), ed. „Anton Bruckner“ Research Unit / Austrian Academy of Sciences (MV 501ff.).
In an entirely different field, four volumes were published between 1985 and 1994 as a series entitled 'dramma per musica', subtitled 'Articles on the history, theory and criticism of music theatre', under the editorship of Richard Bletschacher.
In 1986 and 1993 Walburga Litschauer published her Neue Dokumente zum Schubertkreis - aus Briefen und Tagebüchern seiner Freunde ('New documents regarding the Schubert circle from the letters and diaries of his friends').
From 1991 to March 2004, the MWV had the responsibility for sales of the annual publication of the Österreichische Gesellschaft für Musikwissenschaft ('Austrian society for musicology'), Musicologica austriaca (MV 504 - 520).
Finally, the Mitteilungsblatt der Internationalen Bruckner-Gesellschaft, 'Studien und Berichte' (IBG 1 ff.), which is now available directly from IBG.
The Musikwissenschaftlicher Verlag is a non-profit institution. The elected committee consists of the following persons:
Honorary President: Prof. Dr. Herbert Vogg †
President: Prof. DDr. Otto Biba
1. Vice-President (Managing Director): Dr. Angela Pachovsky
2. Vice-President: Prof. Mag. Leopold Spitzer †
Secretary: Dr. Andrea Harrandt
From the foundation of the publishing house in 1933 until 1938, and from the re-foundation in 1946 until his death in 1967, the managing director of the MWV was Ing. Norbert Furegg. His successor was his daughter Käthe Smetana. When she died in November 1971, the administration was transferred to Doblinger publishers at the beginning of 1972; the Doblinger Prokuristin Margarete Puhlmann was appointed Managing Director. After her death in 1979, the musicologist and Doblinger Director of Publications Dr. Herbert Vogg was entrusted with the managerial directorship of the MWV. When Leopold Nowak retired as General Editor for health reasons in 1989, Dr. Vogg took over responsibility for the completion of the outstanding volumes of the Bruckner Complete Edition. On August 1st, 2002, he retired as Managing Director and his place was taken by his longstanding deputy, Frau Prokuristin Tilly Eder until July 2019. In August 2019 the committee appointed Dr. Angela Pachovsky as Managing Director.